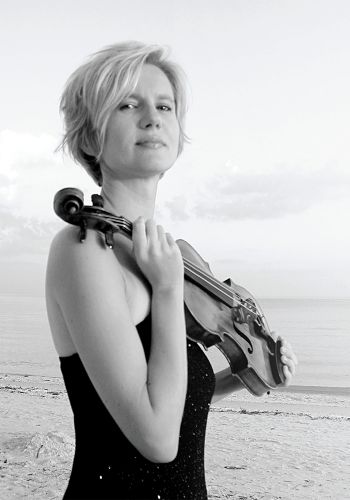 Praised in GRAMOPHONE Magazine for “disciplined virtuosity” violinist Joanna Kurkowicz enjoys an active and versatile career as an award-winning soloist, recitalist, chamber musician and concertmistress. She has performed on many of the great concert stages of the world, including Weill Recital Hall at Carnegie Hall, Jordan Hall, Boston and the Grosse Saal, Salzburg, and has appeared as a soloist with the New Zealand Symphony, the Boston Philharmonic Orchestra, the Metamorphosen Chamber Orchestra, the Jefferson Symphony, the San Luis Obispo Symphony, the New England String Ensemble, the Berkshire Symphony, the Poznan Philharmonic, the Polish National Radio Orchestra in Katowice and others. She has received awards from the Samuel Chester, Presser, Saint Botolph, Kosciuszko, and Olevsky Foundations, the Harvard Musical Association, the Irving McKlein International Competition, the Carmel and Coleman Chamber Music Competitions, and in Poland, the Henryk Wieniawski and Tadeusz Wronski International Competitions. She is a recipient of the New England Conservatory Outstanding Alumni Award.

Ms. Kurkowicz currently serves as concertmistress of the Boston Philharmonic and the Berkshire Symphony. Her previous positions as concertmistress include the Boston Modern Orchestra Project (1999-2004) and the Vermont Symphony (1999-2001). She was a member of the acclaimed Metamorphosen and Orpheus Chamber Orchestras (1997-2003). Since fall 2002, she holds the position of “Artist in Residence” at Williams College in Williamstown, Massachusetts and recently joined the faculty at Tufts University. Between 2006 and 2008 she served as faculty of the Northeastern University Fusion Arts Exchange Program. An avid and sought-after chamber musician, she has collaborated with such eminent artists as Jaime Laredo, Charles Treger, Laurence Lesser and James Buswell. She is a founding member and Artistic Advisor of the Chameleon Arts Ensemble of Boston and the Plymouth Chamber Music Festival. As a guest artist, she has participated in the Mozarteum Festival in Salzburg, the Ravinia Festival, Barge Concert Series (NY), the Asia Pacific Festival in Wellington, New Zealand, the Rockport Chamber Music Festival, the EuroSilesia International Music Festival, Warsaw Music Gardens Festival,  International Orpheus  Academy in Vienna and the Martha’s Vineyard Chamber Music Society.

Ms. Kurkowicz is a strong advocate of contemporary music; she has premiered among others works by G. Schuller, R. Shapey, P. Ruders, D. Kechley and G. Bacewicz. Her recent Boston premiere of S. Korde Violin Concerto with the Boston Philharmonic Orchestra met with enthusiastic response. Subsequent performances in Europe and New Zealand were equally well-received, and the United States premiere with the Boston Philharmonic Orchestra was a highlight of the 2007-2008 concert season.

In August 2009 Joanna Kurkowicz released a recording, on the Chandos label, of the Violin Concertos No. 1, 3 and 7 of Grazyna Bacewicz with the Polish Radio Symphony Orchestra under conductor Lukasz Borowicz ,to worldwide critical acclaim. It received prestigious “Diapason d’Or” Award (March 2010) and was nominated for “Preis der Deutchen Schallplatten Kritik 2009” (the German Record Critics Award) as well as Poland’s most important music recording Award “Fryderyk 2010”. The CD reached #6 on Amazon’s chart Best Classical Albums in 2009. Volume 2 of Bacewicz Violin Concertos is scheduled for release on July 2011. Her previous CD of Bacewicz’ music for violin and piano “Polish Capriccio,” also released on Chandos Records, was praised in FANFARE Magazine as “spectacular release” and in INTERNATIONAL RECORD REVIEW for “…passion, authority and sheer elan…” and received fantastic reviews in numerous magazines including STRAD, AMERICAN RECORD GUIDE and MUZYKA 21. Her Bridge Records release featuring music of Alfred Schnittke has been noted in the STRAD Magazine for “strong impact… her playing holds one enthralled, demonstrating strong personality and assured technique.” The CD was chosen by Boston Herald as “Best of Year 2001.” Ms. Kurkowicz can also be heard on the Centaur, CRI, Capstone, Albany, New World Records and Archetype labels. Her Boston premiere of sonatas by Rebecca Clarke was listed in the Boston Globe “Best Concerts of 2000.”

A native of Lublin, Poland, Joanna Kurkowicz began to study violin under a tutelage of Franciszek Falger. She earned a Master of Music Degree with distinction from the Paderewski Conservatory of Music in Poznan, Poland, in the studio of Jadwiga Kaliszewska. She came to the United States in 1992 to complete a second Master of Music degree as a student and teaching assistant of Charles Treger at the University of Massachusetts, Amherst. Ms. Kurkowicz completed the prestigious Artist Diploma program at the New England Conservatory of Music where she studied with Masuko Ushioda. Joanna Kurkowicz plays on a Petrus Guarnerius violin dated from 1699.