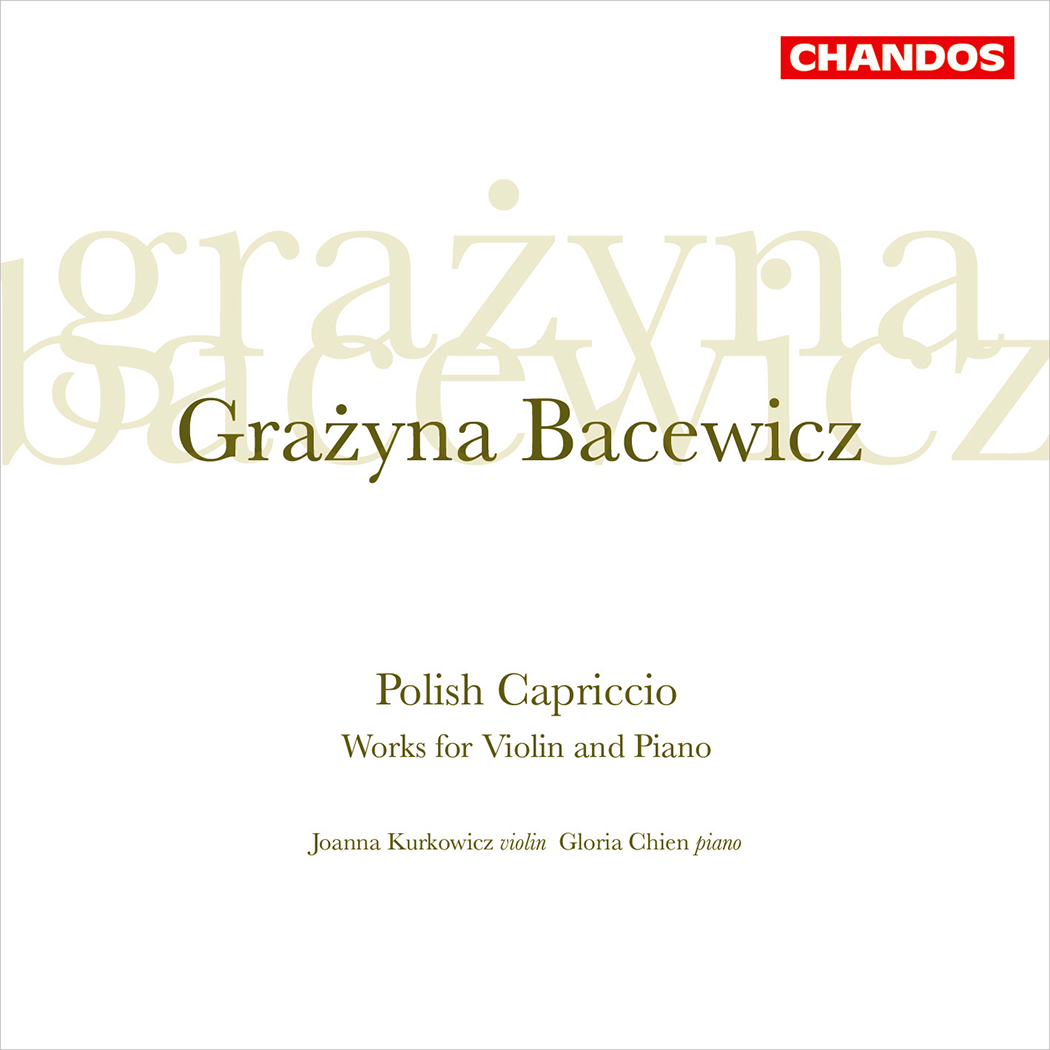 order at Chandos Records or amazon.com or Music Island

A disc of music by a composer little known outside her native Poland, presented with such a passionate and persistent advocacy by violinist Joanna Kurkowicz and pianist Gloria Chien is the result of many years of research by Kurkowicz who refers to the music, quite simply as “amazing.” Kurkowicz hopes that this recording will expand awareness of Bacewicz’s importance as a major composer of the twentieth century.
—CHANDOS RECORDS

Polish pieces well worth exploring
Grazyna Bacewicz (1909-69) left a sizeable body of music including seven each of violin concertos and string quartets. This miscellany features violin and piano works dating from 1946-58. The elan of Oberek No.1 and Capriccio, and the long-breathed expression of The Polish Capriccio, are firmly in the virtuoso tradition of Wieniawski. The Fourth Sonata balances Bartok’s influence in its incisive rhythms with hints of Debussy in the inward expression of Andante. Formally more integrated, the Fifth Sonata affectingly draws on Polish folk music, while the Partita has a stark motivic concentration and emotional plangency. The radical spirit of the Warsaw Autumn Festival (of which Bacewicz was one of the founders) can be detected in the Second Solo Sonat’s extended dynamics and semi-tonal inflections, with Bartok’s Solo Sonata an inevitable though benign model.

This is music which demands disciplined virtuosity, such as Joanna Kurkowicz has in spades; Gloria Chien is the attentive pianist. Those keen to investigate a not inconsiderable composer could profitably start here.
—Richard Whitehouse, GRAMOPHONE

…These are super performances. The Poznan and Boston trained Joanna Kurkowicz plays a 1699 Guarneri and it shows. Accompanied with great character by Taiwanese fellow-Bostonian Gloria Chien, Kurkowicz produces wonderful sounds from the angrily spiky, virtuosic Scherzo of Bacewicz’s Fourth Sonata to the beautiful Szymanowski-influences Adagio of the Fifth Sonata, in which both players risk a distinctly slow adagio pace and carry it off; the effect is almost Bach-like.

The masterpieces here include the Partita (1955) and the Sonata No.2 for unaccompanied violin… What remains–the Oberek, the Capriccio, the Toccata of the Partita–have a delicious cheek, while the Polish Capriccio echoes the melancholy of the Partita’s Intermezzo. Wonderful performances by both and terrific sound mean that this CD can easily be recommended.
—Roderic Dunnet, STRAD MAGAZINE

…Bacewicz’s current discography maybe smaller than it deserves, but it is a distinguished one, made all the more so by current release. Joanna Kurkowicz, originally from Lublin, Poland, and currently leader of the Boston Philharmonic, plays this music on her trusty 1699 Guarnerius with a passion, authority and sheer elan which suggests a longer familiarity with these scores that can surely have been the case. From the quicksilver, Mendelssohnian deftness of Bacewicz’s scherzos to the Bartokian technical helter-skelter of her outer movements.
Kurkowicz appears to have all the answers… Recommended.
—Julian Haylock, INTERNATIONAL RECORD REVIEW

* * * * *
What a great discovery! These chamber works of Polish composer Grazyna Bacewicz (1909-1969), roughly the contemporary of Shostakovich, should impress most listeners as dense masterpieces of neoclassical and atonal style. It’s a pity she is not more well-known in this country, but hopefully discs like this will change that. Bacewicz is known as Poland’s first major woman composer, a mantel she richly deserves. Her Sonata No. 4 starts off deceptively slow, then breaks into a frenetic folk dance, one whose driving rhythms Joanna Kurkowicz and Gloria Chien reproduce with deft intensity. Kurkowicz plays the affecting Andante with subtlety and nary a trace of sentimentality. The Scherzo seems like it was forged for these two performers, with its impish timing and sudden legatos. But they truly blaze through the passionate Finale…

With its stunning challenges to virtuosity, this piece (Sonata No. 2 for Solo Violin) should leave you with your jaw hanging open. Kurkowicz taps deep reservoirs of national feeling in this work. It could have been written for her, so naturally does she navigate its difficult landscape. Other works on this disc make it worthy of many listenings: the playful Oberek No. 1, the whimsical and unpredictable Capriccio and Polish Capriccio, and the melancholic Partita. This melding of three formidable artists grabbed my attention from the start and wouldn’t let go until the last note.
—Peter Bates, AUDIOPHILE MAGAZINE

“…This recording is an excellent example of the most successful promotion of Polish music.”
—MUZYKA 21