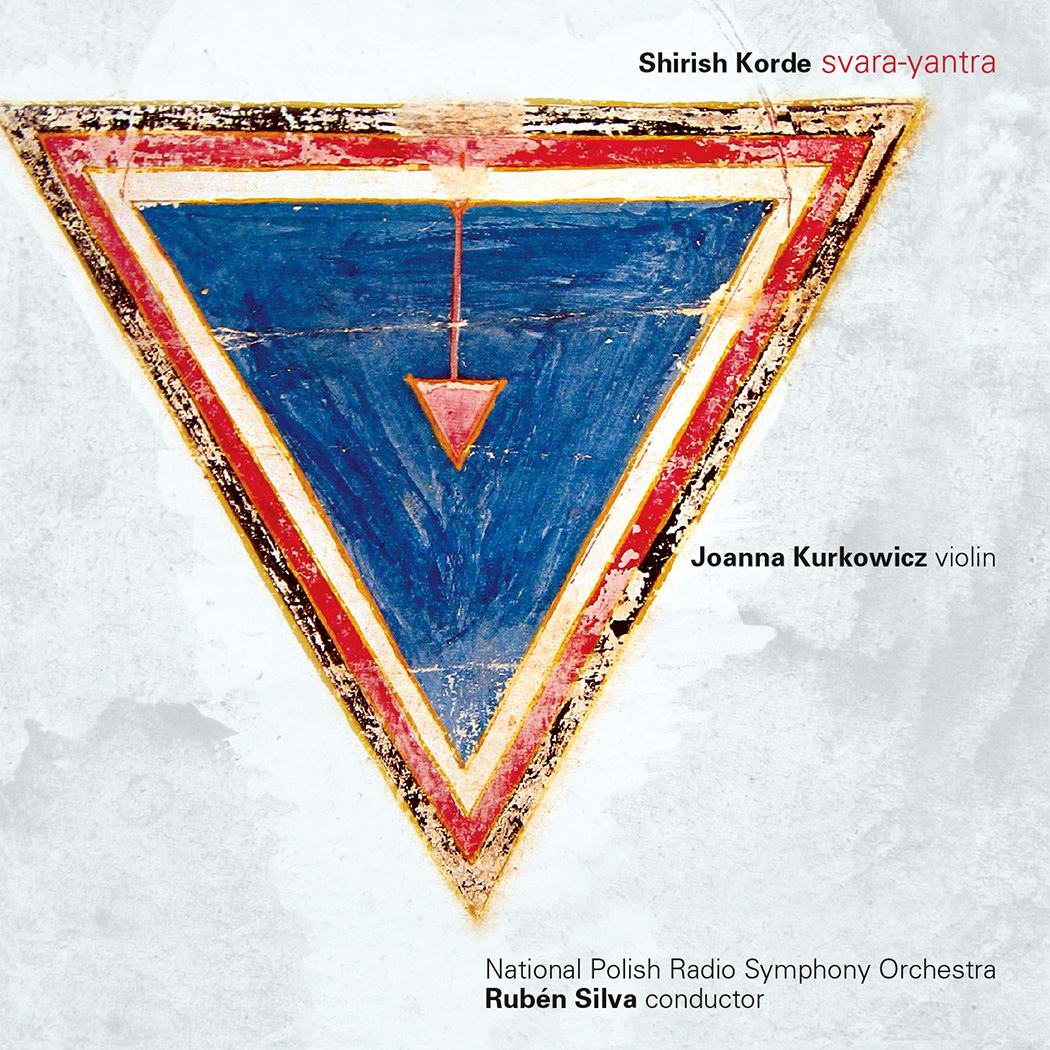 “The Boston Philharmonic and conductor Benjamin Zander opened their season this weekend with a mixed bag: a comparative rarity, a venerable warhorse, and a novelty that stole the show from both.

The new piece, an American premiere, was Shirish Korde’s “Svara-Yantra,” and a terrific piece it is. In this Indian-influenced concerto for violin, tabla (Indian tuned drums), and orchestra, East and West don’t meet halfway: the traditional symphony is instead dropped into the middle of the subcontinent, exploding with color. The Philharmonic’s usual concertmistress, Joanna Kurkowicz, commissioned the work from Korde, a native of India who teaches at Holy Cross; Kurkowicz carried the opening movement, spinning out declamatory arabesques, idiomatically sliding and bending tones over a drone that coursed through the orchestra with impressionistic vibrancy.

The superb tabla player Samir Chatterjee joined the conversation in the second movement, […] and the music kicked into high gear, Kurkowicz’s scurrying violin riding Chatterjee’s intricate drumming over Technicolor splashes from the orchestra. […] An extended give-and-take between the two enthused soloists anchored the finale, framed by a torrential, exuberant tune taken up by the entire band, propelled by Chatterjee’s rhythmic authority and Kurkowicz’s energy.”
—BOSTON GLOBE by Matthew Guerrieri
|

“Kudos to the Boston Philharmonic for performing not just one, but two unfamiliar pieces. The gamble paid off. The crowd warmed immediately to Alberto Ginastera’s Variacionesconcertantes. But they burned white hot to Shirish Korde’s Svara-Yantra.

Nothing could have prepared the crowd for Korde’s Svara-Yantra, Concerto for Violin and Tabla. You don’t get many pieces like this in a given year. Those who heard Yehudi Menuhin and Ravi Shankar’s “East Meets West” recordings of the late sixties may have had some point of reference, but most probably didn’t. The concerto began with an alap, a non-rhythmic movement with an irregular pulse. From the beginning violinist Joanna Kurkowicz infused it with a keening and probing mood. The second movement plunged the audience into the world of eastern rhythms. Kurkowicz, a musician inherently infused with the soul of modernism, accomodated the piece’s harsh angles and–yes, there were some–smooth curves. She deftly led the audience through the winding tempos and corralled the dynamic shadings, effortlessly leaping to other keys and ever higher levels of intensity. Samir Chatterjee played tabla with a deftness that recalled tabla player Zakir Hussain. His style seemed to incorporate a catalog of tabla effects, including bols, which are non-verbal mutterings that approximate the tabla “talking.” Kurkowicz and Korde knew they were introducing a new type of music to the Boston audience, a hybrid of western orchestral effects and eastern rhythms, so they filled it with cascades of invention. It deserved every second of its standing ovation.”
—Peter Bates

“Joanna Kurkowicz is not a new name on the Chandos label: she has already released a CD of music of Grazyna Bacewicz (1909–1969) on CHAN 10250, reviewed to much acclaim by the international press. Kurkowicz’s busy schedule is characterised by an impressively enterprising repertoire and she has premiered a host of important new contemporary works. Her Bacewicz recording on Chandos is a prime example of her approach: enterprising repertoire with superb, virtuosic musicianship (‘disciplined virtuosity’, as Gramophone magazine wrote!) and a dazzling freshness of inspiration.

This month sees the release of some remarkable, varied and striking music in the Violin Concerto Svara Yantra of Shirish Korde. This haunting work, richly imbued with Indian colours and musical tradition, offers something unique and powerful, with all manner of exotic and imaginative instrumental textures and detail from both the soloist, Kurkowicz, and the orchestra. By way of contrast, Japan is the inspiration for the second concertante work on this recording, Cranes Dancing. Again, one finds oneself responding to the myriad of haunting and exotic sounds conjured up in this impressive work, which is dedicated to Joanna Kurkowicz and was premiered in 2005 (MISC 1005) ”
—CHANDOS RECORDS

In Indian music, Svara refers to pitches of the scale: Sa, Re, Ga…i.e. Do, Re, Mi… , etc. Svara might also mean: audible sound or shruti. Yantra is a geometric diagram, usually constructed from intersecting triangles and circles, which is used to harness the mind in meditation. The composition Svara-Yantra, represents three sonic structures (diagrams), which are conceived as devices for meditations through sound.

Svara-Yantra is a violin concerto in three movements, written for violin, tabla, and
symphony orchestra. Svara-Yantra was inspired by the brilliant and passionate playing of the violinist Joanna Kurkowicz. Svara refers to pitches or notes in Indian music theory, but in this piece it means audible sound or “shruti.” Yantra is a term for geometric diagrams, usually consisting of intersecting triangles and circles, which are used to harness the mind in meditation. Svara-Yantra represents three sonic meditations on Raga and Tala. It is based on the Alap-Jor-Jhalla-Gat structure of North Indian classical music. Like an Indian Raga performance, the three movements in my piece form a continuum of tempos, from very slow in the first movement to extremely fast in the third movement.

The first movement, Alap Rag Misra Pilu, is dedicated to Pandit Hariprasad Chaurasria. Raga Pilu unfolds gradually with the violin playing a long ornamental arch-like melody against a drone-like harmonic mosaic, which forms the orchestral backdrop to the violin line. The orchestral harmonies represent a transformation of the drone into harmonic fields and a vertical spatialization of the Raga into several spectral layers.

The second movement, Rag Kerwani, is inspired by the great South Indian violin master L. Subramaniam, and is based on a chaconne-like structure. The 5/4 theme, made essentially of a three note motif (A, G, F#) is repeated 3 times, each time in rhythmic diminution (dotted quarters, quarters, and eights). The theme forms a point of reference for variations of increasing complexity which follow, and culminate in a tabla solo. A final restatement and elaboration of the theme concludes this movement.

After an improvised cadenza which draws on themes from the first two movements, and composed by Joanna Kurkowicz, materials for the third movement are introduced. Joy, the final movement is based on a composition by the jazz guitarist John McLaughlin and consists of an orchestral tutti in unison, followed by a violin-tabla duet cadenza and a return of the orchestral tutti. The third movement is dedicated to the violinist Joanna Kurkowicz, Samir Chatterjee, and John McLaughlin.

Svara-Yantra was commissioned by Joanna Kurkowicz, and the National Polish Radio Symphony Orchestra and was premiered on November 27, 2005 in Katowice, Poland under the direction of Ruben Silva.

Cranes Dancing is part of a series of pieces based on a crane motif. The first piece in the series, Tenderness of Cranes (1990), was based on a Japanese shakuhachi [end-blown bamboo flute] composition called Tsuru no Sugomori, and is influenced by techniques of the Japanese shakuhachi and notions of breath, rhythm, and elastic time. Cranes Dancing expands the ideas of Tenderness of Cranes and is scored for solo violin and string orchestra. The work is in several sections, with a string orchestra shadowing the solo violin line, sometimes refracting it or commenting on it. The string orchestra colors used in the piece are drawn from and elaborate the shakuhachi flute colors in the original Tenderness, and also draw on the colors of Japanese Gagaku orchestral music. Cranes Dancing is dedicated to violinist Joanna Kurkowicz, who gave the first performance of this work at Williams College in Williamstown, Massachusetts on March 11, 2005.
—Shirish Korde