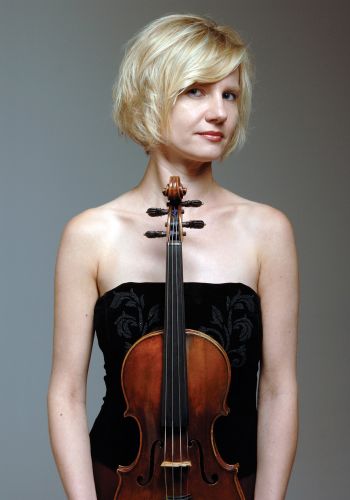 “…sense of style and an extraordinary musicality…”

Here are a few highlights of Joanna Kurkowicz recent and current projects and appearances.

Polish violinist Joanna Kurkowicz’s recording of Bacewicz Concertos Vol.2 with the Polish Radio Symphony Orchestra Warsaw under conductor Lukasz Borowicz has been awarded the “Diapason 5” for October 2011 from the French music journal, Diapason. The Diapason 5 is a monthly recommendation given to outstanding classical music recordings by reviewers of the Diapason.

In Joanna’s words: “I hope that violinists around the world will take up these concertos and that listeners will enjoy them. They are like rare stones. You have to find them, but once found they prove to shine brilliantly.”

Robert Johnson of Radio New Zealand wrote: “Kurkowicz is a highly accomplished soloist with an expressive style of playing and virtuosity to burn when it’s required. … It’s difficult to imagine a more persuasive argument being made for the music of Bacewicz.”

On July 1 st. 2010 Joanna Kurkowicz was a soloist in the Inaugural Concert of the “Music Gardens” Festival in Warsaw, Poland. She performed Violin Concerto No.7 for violin and orchestra by Grazyna Bacewicz with the Juventus Symphony Orchestra under the baton of Robert Groslot from Belgium. Polish violinist Joanna Kurkowicz’s recording of Bacewicz Concertos with the Polish Radio Symphony Orchestra Warsaw under conductor Lukasz Borowicz has been awarded the “Diapason d’Or”, or “Golden Tuning Fork,” for March 2010 from the French music journal, Diapason. The Diapason d’Or is a monthly recommendation given to outstanding classical music recordings by reviewers of the Diapason. This award is broadly equivalent to the Editor’s Choice award given by Gramophone.

In October 2009 The CD was also nominated for the “Preis der Deutchen Schallplaten Kritik” 2009 (The German Record Critics’ Award) which has been in existence since 1963. It was inaugurated to set the “most rigorous standards for supreme achievement” in the field of recording.

Chandos Records (CHAN 10533) of Grazyna Bacewicz Concertos for violin and orchestra has been placed #6 on Amazon.com’s list of top 25“Best Classical Albums of 2009”.

The year 2009 marks the 100th anniversary of the birth of Grazyna Bacewicz. She was regarded by Witold Lutoslawski as “a distinguished Polish composer of the twentieth century and one of the foremost women composers of all time.” She certainly deserves much wider recognition than she has received to date outside of her native country of Poland.

The recording was enthusiastically hailed in the GUARDIAN by Andrew Clements: “…superbly played selection… It is an interesting collection, and Joanna Kurkowicz is a keenly alert soloist in all three works… They are wonderfully idiomatic works, colourfully scored and always interesting.”

New works by Tufts composers, May 2009

On May 1st, 2009 Joanna Kurkowicz premiered new works for violin and piano written for her by Tufts composers Hahn, Stallings, Tierney, Toscano, Faris and the premiere of John McDonald’s work Airy at Granoff Center at Tufts University.

On April 1, 2009 Joanna played the Brahms Project: all Brahms sonatas for violin and piano, with pianist Gloria Chien at Tufts University Granoff Center.

On February 13 Joanna Kurkowicz appeared on WGBH Radio Boston with Tzigane by M. Ravel. Subsequently she performed Tzigane along with B. Smetana Piano Trio on February 14 and 15 at Goethe Institute in Boston. “This is a true show piece and Kurkowicz and pianist Gloria Chien handle it with skill and creativity.” (Peter Bates review exerpt)

Chameleon Arts Ensemble won 2009 CMA/ASCAP Award for Adventurous Programming. Joanna is a founding member and artistic adviser for the group.

In November 2008 Joanna appeared at the Barge Concert Series in New York presenting the Brahms Project: all Brahms sonatas for violin and piano, with pianist Doris Stevenson. In December 2008 they played the same recital at Williams College.

On November 8th Joanna and pianist Gloria Chien performed R. Schumann Sonata No.2 for violin and piano at Goethe Institute in Boston as part of the Chameleon Arts Ensemble Concert series (review exerpt).

On October 3rd 2008 Joanna Kurkowicz premiered Marc Farris’ “For Jennifer Fitzgerald” for violin and piano playing with the composer and pianist John McDonald. This was a memorial concert for Jennifer Fitzegerald at Distler Hall, Tufts University.

On July 10th Joanna participated in the performance of Fred Lerdahl’sImbrications (2001) at the International Conference Music, Language and the Mind II hosted by Tufts University Music Department in the Granoff Center.

She also served as faculty of the Fusion Art Exchange Program.

On June 13th Joanna appeared as soloist with Filharmonia Warminsko-Mazurska in Olsztyn, Poland in a performance of S. Barber Violin Concerto.

On May 17th, 2008 Joanna received prestigious New England Conservatory Outstanding Alumni Award “in recognition of her distinguished career and contributions to the music world.” On that occasion she presented a speech “Disciplined Virtuosity: The active and versatile career of a solo violinist” with a special performance of J. Brahms Sonata in G major with pianist Gloria Chien.

On February 2, 2008 Joanna performed S. Prokofiev Sonata in F minor for violin and piano at Goethe Institute.
It wa s”a stellar rendition” according to Peter Bates of Stylus Magazine. “Kurkowicz and Chien excel at exposing the harsh edges of a piece, and in this one there is perfect synchronicity between the two….”(full review)

On November 30th 2007 Joanna Kurkowicz appeared at Barge Music Series in New York with her colleagues: pianist Doris Stevenson and percussionist Matt Gold.
She performed works by  American composers: Andre Previn, Kenji Bunch and Frederic Rzewski in the program The New Yorkerdescribed as “a range of appealing works for violin, percussion, and piano.”

Zygmunt Krauze at Tufts University in Boston in October 2007

On October 22, renowned Polish composer Zygmunt Krauze visited Tufts University in Boston for a recital and a lecture. The composer performed some of his solo pieces and then was joined by Ms. Kurkowicz and her group for his Piano Quintet. Other performers were Sarita Uranovsky, violin II; Scott Woolweaver, viola; and Emmanuell Feldman, cello.

American Premiere of Svara Yantra in Boston in October 2007

On October 17, 18, 20, and 21, 2007 Joanna Kurkowicz was a soloist in the US Premiere of Svara Yantra, the Concerto for violin and tabla by Shirish Korde with the Boston Philharmonic. The concerts took place in Jordan Hall, Boston, Sanders Theater, Cambridge and Mechanics Hall, Worcester. The public response  was overwhelming with standing ovation after each of four concerts and great reviews in the Boston Globe and other publications. 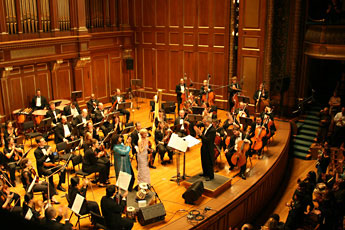 “We have an amazing opening planned for next season. The orchestra is giving the American premiere of Svara Yantra, a dazzling violin concerto by local composer Shirish Korde that combines elements of Western music with instrumental techniques, rhythms, and scales peculiar to the music of India. It was composed especially for our beloved concertmistress Joanna Kurkowicz, who has performed it in Europe and Asia. It is enthralling—I’m completely in love with it and I know everyone who hears it in October will be spellbound.”

In November 2005 Joanna played a World Premiere of Shirish Korde Violin Concerto Svara Yantra with the National Polish Radio Symphony Orchestra in Katowice, Poland. The concerto was inspired and written for her and met with exceptionally enthustiastic public response.

In 2006-2007 season, Joanna performed Svara Yantra concerto, with the New Zealand Symphony as a part of the Asia Pacific Festivalin Wellington, New Zealand and with the Koszalin Philharmonic in Poland.

The recording of Svara Yantra and Dancing Cranes are currently available for download at CHANDOS Records website and Amazon.

Premieres of Korde and Koplevitz at Harvard

Percussion Plus at DePauw University in September 2006

This fall Joanna Kurkowicz was involved in an exciting concert and recording project with Percussion Plus Project at DePauw University, a unique contemporary chamber music ensemble, whose programs consist of works for percussion and one solo instrument. The concert featured Joanna play